Walk in Ireland – The One With the National Famine Way

Put on your walking boots and weave along the route of the “Missing 1490” from Strokestown to Dublin, through beautiful villages, traditional market towns, country lanes, along the banks of the Royal Canal and unspoilt, scenic countryside…….. and make sure to get your special passport stamped along the way!

The National Famine Way marks the poignant ill-fated story of assisted emigration in Ireland during the Famine in 1847 when 1,490 poor and hungry were forced to walk the 165km from the Strokestown Park Estate, County Roscommon to Custom House Quay in Dublin. They traveled onward to Liverpool and almost a third of them perished crossing the Atlantic in “coffin ships” bound for Canada.

The National Famine Way is a digitally and physically way marked 165km National walking trail linking Ireland’s Hidden heartlands and Ireland’s Ancient East. The trail is topped and tailed by museums connecting the National Famine Museum in Strokestown Park, Co. Roscommon, with Rowan Gillespie’s Famine memorial on Custom House Quay in Dublin along the banks of the Royal Canal. The trail ends near the Jeanie Johnston Tall replica famine ship and EPIC The Irish Emigration Museum.  Walkers can set their own pace and follow in the footsteps of the 1,490 tenants who were forced to emigrate from Strokestown to Canada on some of the worst of the coffin ships.  The trail is waymarked with 30 plinths and pairs of 19th Century bronze shoe sculptures.

The walk is open to all.  The entire walk can be completed at your own pace in your own time.

Easy to moderate – And you can break it down into smaller sections.

The National Famine Way can be done in sections over time or all at once, it’s your choice.

However, to truly follow in their footsteps it is recommended to follow in the footsteps of the 1,490 who left a very rural existence in Roscommon in 1847 and arrived into a bustling Dublin City, tired and very hungry.

Finish your walk at Famine Memorial, the EPIC The Irish Emigration Museum and the Jeanie Johnston Famine Ship in Dublin City.

The passport/guide focuses on the walk of 12-year-old Daniel Tighe, who survived the terrifying transatlantic journey in 1847. The stories re-imagining Daniel’s journey were written by author Marita Conlon-McKenna, and are connected to markers featuring over thirty pairs of bronze children’s shoes along the walking route.

Walkers can hop in and out of the route as they wish, but any National Famine Way Walker who manages to pick up all of the 27 stage stamps can then collect a Camino-style “completion certificate” at the end from EPIC the Irish Emigration Museum.

In the YouTube film below the renowned author, Marita Conlon-McKenna, tells the story of Daniel Tighe’s journey in “the National Famine Way Shoe Stories film”. This film and online event is hosted by the National Famine Museum, Strokestown Park and Irish Heritage Trust with funding from Dublin City Council.

At the height of the Great Irish Famine in May of 1847, twelve year old Daniel Tighe was forced to walk 165km with 1,490 assisted emigrants from the Strokestown Park Estate in County Roscommon along the Royal Canal to Custom House Quay in Dublin. Their sorrowful journey is marked by over thirty pairs of bronze shoe sculptures on the National Famine Way walking trail.

At the National Famine Museum, Strokestown Park you will immerse yourself in the haunting story of the Irish Famine, the eviction, migration and the assisted emigration scheme that was enacted by Major Denis Mahon. The museum displays papers and artifacts documenting the history of this important period in Irish history.

Strokestown was the seat of the Mahon (and later Pakenham Mahon) family from 1653 until 1981. Due to the events of 1847, Strokestown became infamous when Denis Mahon was the first landlord to be assassinated during the Famine period after forcing his tenants to emigrate on some of the worst of the coffin ships with repercussions as far as the Vatican, Rome and The British Parliament, London.

The search for Strokestown’s missing 1,490 emigrants is based on the emigrant list in the Strokestown Park Archive. Together the house, museum and gardens embody and communicate over 300 years of Irish history.

Explore EPIC the Irish Emigration Museum, where small moments in time connect you deeply with the wider story of the Irish nation itself. The fully digital museum tells the moving and unforgettable stories of those who left the island of Ireland, and how they influenced and shaped the world. EPIC embraces the past and the future with 1,500 years of Irish history and culture housed in its atmospheric vaults and state of the art interactive galleries, complete with touch screens, motion sensor quizzes and a feast of powerful audio and video that bring Irish history to life.  At Europe’s Leading Tourist Attraction, discover Ireland from the outside in and find out why saying “I’m Irish” is one of the biggest conversation starters, no matter where you are.

Follow in the footsteps those who fled the Famine to North America on board the Jeanie Johnston, a replica famine ship. Hear the stories of the thousands of Irish people who fled the Famine and embarked on the treacherous voyage in the hope of a better life. You will be transported back in time to join your ancestors on their grueling journey. The tour begins with a walk around the upper deck, where you will see the majestic masts, admire the craftsmanship and learn about the ship’s history.

It cost 3 pounds 10 shillings to flee the Famine. 100,000 people paid with their lives. Find out how they paid for it. Learn about their grim voyage in cramped and filthy conditions and the risks they faced from disease, starvation and disaster. Hear how they passed the time on their traumatic voyage and discover what fate awaited them.

The Famine Memorial Statues at the Custom House Quay in the Dublin Docklands, were presented to the City of Dublin in 1997 and were designed and crafted by Dublin sculptor Rowan Gillespie. No event in history has had a more profound effect on Ireland and the worldwide Irish Community than that of the Great Irish Famine (1845-1849).

The 165km trail follows mostly off-road paths along the Royal Canal and is detailed in a downloadable OSI Trail Map.

Leave word with someone about where you are going and approximately what time you expect to be back.

Never leave any items or valuables visible inside your parked vehicle.

Phone 999 or 112 and advise the emergency crew whether you need an Ambulance, the Gardaí (police), Fire Brigade or Mountain Rescue.

The Famine Way Walks “Leave No Trace” principles are: 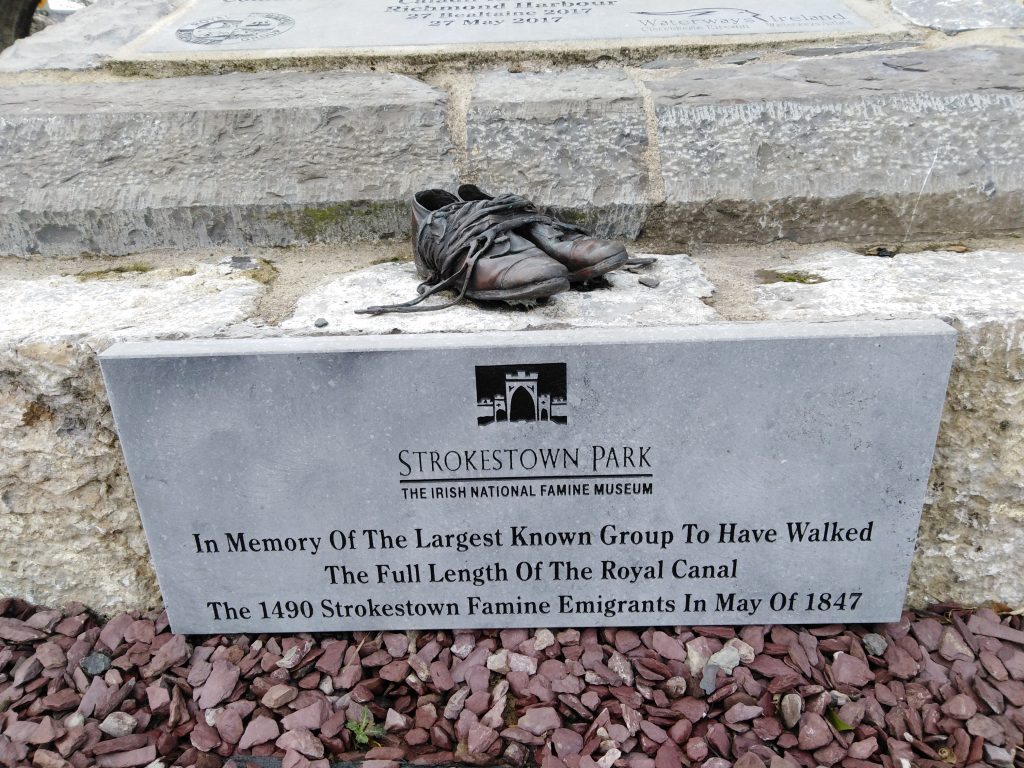 Plan a personalized epic adventure through Ireland’s Hidden Heartlands and Ireland’s Ancient East, with Specialized Travel Services and explore Irish history, mythology and traditional Irish culture. It is guaranteed to be a trip of a lifetime filled with everything Irish – it’s fascinating heritage, mouth watering food, luxury accommodation, scenic views and of course a Warm Irish Welcome.

Tour the sights of the Emerald Isle with one of our professional driver guides and a luxury vehicle at your service throughout. Maybe you would like to add additional luxury to your Ireland tour and stay in some of Ireland’s most prestigious castles on a dream castle vacation. A trip to Ireland is the perfect time to do something different and exciting.

Take a look at some of our Private Chauffeur Vacations for some inspiration for your customized Ireland Tour – If you would like to contact the team at Specialized Travel Services complete the Contact form or send us an email to newyork@special-ireland.com – We look forward to hearing from you.