Top 10 Things To Do In Limerick City.

Here are our top 10 things to do in Limerick City on your next vacation in Ireland:

Walk In The Footsteps Of Knights.

Limerick city straddles the majestic River Shannon and is rich in medieval and Georgian architecture. One of its top attractions is King John’s Castle on ‘King’s Island’ with a stunning exhibition bringing to life over 800 years of dramatic local history through 21st century touch screen technology, 3 D models and dazzling computer generated animations. It’s easy to imagine what King John’s Castle would have been like in the past as you walk around fortifications and rooms that remain relatively unchanged, even after centuries. Costumed characters tell stories and interact with visitors of all ages in a fun and engaging way.

Travel Back In Time.

The Hunt Museum exhibits one of Ireland’s greatest private collections of art and antiques, dating from the Neolithic to the 20th Century, including works by Renoir, Picasso and Jack B.Yeats.  The 2000-plus items are from the private collection of the late John and Gertrude Hunt, antique dealers and consultants, who championed historical preservation throughout the region. An inscription at the Hunt Museum reads ‘The loveliness of many coloured gems has called me away from external cares’ which aptly describes the attributes of this wonderful museum in Limerick.

Try some local food at the Milk Market.

Stroll up Denmark St to one of the oldest food markets in Ireland now fully modernized without having lost any of its charm. Capture the fusion of flavour, music and the friendly locals in this old stone building that was once a corn market. The Milk Market is a buzzing hive of activity that has attracted traders from all over the region since 1852. Try mouth-watering local homemade breads, fish from West Cork, locally sourced fruit and vegetables, and a delicious selection of organic meat, jams, cheese, pastries and local chocolates, along with fashion, fresh flowers, arts and crafts.

Walk in the footsteps of Limerick’s most famous writer.

Explore the life of the Pulitzer Prize-winning author Frank McCourt on the Angela’s Ashes Walking Tour. Although McCourt was born in Brooklyn, he was educated in Limerick and he wrote the bestselling Angela’s Ashes about his childhood in the city. On this walking tour Limerick-born Noel Curtin will take you on an immersive and captivating tour of the city to a number of locations mentioned in the book, including Leamy House, the school which Frank attended until his 14th birthday, through the streets where Frank grew up with his family, and the beautiful Georgian Pery Square beside the People’s Park.

Take in Some History at St Mary’s Cathedral.

The Cathedral of Saint Mary Blessed Virgin was founded in 1168 on the site of a palace donated by Donal Mor O’Brien – King of Munster. Historic experts believe that parts of the palace are incorporated into the present structure of the cathedral. The most prominent is the Romanesque West Door, which was the main entrance to the palace. The palace had been built on the site of a Viking meeting house. This had been the centre of government in the early medieval Viking city. The Cathedral has seen many changes as the city expanded around it and it remains today the oldest and most historic building in Limerick.

See Some Works Of Art.

The Limerick City Gallery of Art is housed in the Carnegie Building, on the grounds of the People’s Park in the centre of Limerick City. It is home to a superb collection of Irish paintings. It’s big enough that you can while away the hours here without a problem, but a good starting point is to look for Chairopanes, Jack B Yeats’s portrayal of a fairground amusement. The Permanent Collection is exhibited on a rotation basis throughout the year in its dedicated exhibition gallery. Artists within the Permanent Collection are Paul Henry, Jack B. Yeats, Sean Keating, Charles Lamb, Letita Hamilton, Grace Henry, Sarah Purser, Walter Verling, Donald Teskey, John Shinnors, and many more.

The famous Dolan’s Pub is one of Limerick’s best loved traditional Irish pubs, music venues and seafood restaurants situated on the dockland of Limerick City. This award-winning venue is synonymous across the world for its charm, Irish hospitality and incredible atmosphere where you’ll get a great pint, delicious food, and Irish music & dancing sessions.

Embark on a Brewery Tour.

Located in the heart of Limerick’s Medieval Quarter, Treaty City Brewery Tours provide a unique and authentic experience that pays homage to the art of craft brewing that has been much loved throughout the centuries. Hear from an experienced master brewer who will explain the process and ingredients used to create the craft beer – and, of course you can have a sip at the complimentary beer tasting. 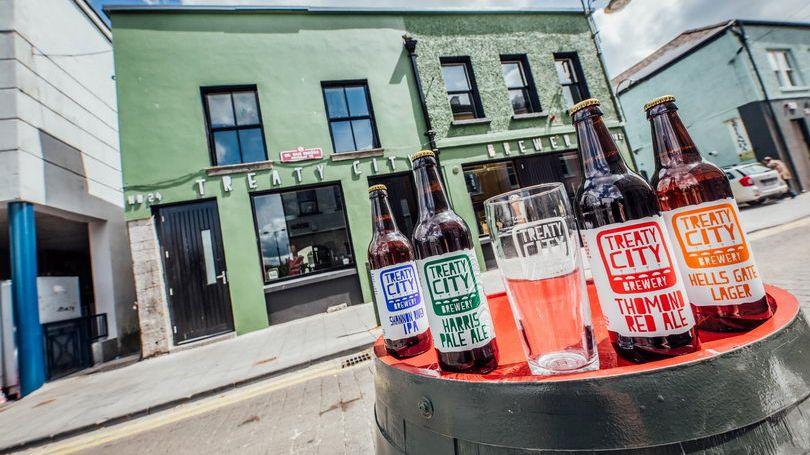 Limerick is also famed as the sporting capital of Ireland and the “spiritual home” of Munster Rugby. Thomond Park, dominates the skyline just outside of the city centre and it is where the supporters congregate to see their rugby idols. Visitors can experience the proud history and heritage of Munster Rugby at Thomond Park Stadium’s Interactive Museum, or follow in the footsteps of Munster heroes by taking a look behind the scenes at the historic stadium and relive iconic moments like that infamous win against the All Blacks in 1978. From a seat in the home dressing room to a walk down the tunnel to the pitch, the tour gives you a unique opportunity to experience how the Munster Rugby players feel on their big match days. Gaelic football, hurling, golf, horse-racing, walking and cycling are other popular pursuits to experience in Limerick.

Afternoon tea at No.1 Pery Square is a truly enjoyable experience. Enjoy afternoon tea in the Drawing Room at No. 1 Pery Square, the splendid Georgian country house located in the heart of Limerick’s Georgian Quarter. Cahill’s Tea’s of Wickham Street who operate from the historic old snuff factory in Limerick have created some gorgeous blends for this splendid afternoon tea that have been sourced from organic tea gardens in India, Ceylon & China. Enjoy the very best of loose leaf teas; black tea, green tea and more exotic varieties along with  a selection of sweet & savoury items. Afternoon Tea at No.1 is a great alternative for a get together with friends or a family gathering. Relax by the fireside with a cup of tea or a glass of bubbly while enjoying the royal ambiance in this relaxed environment. 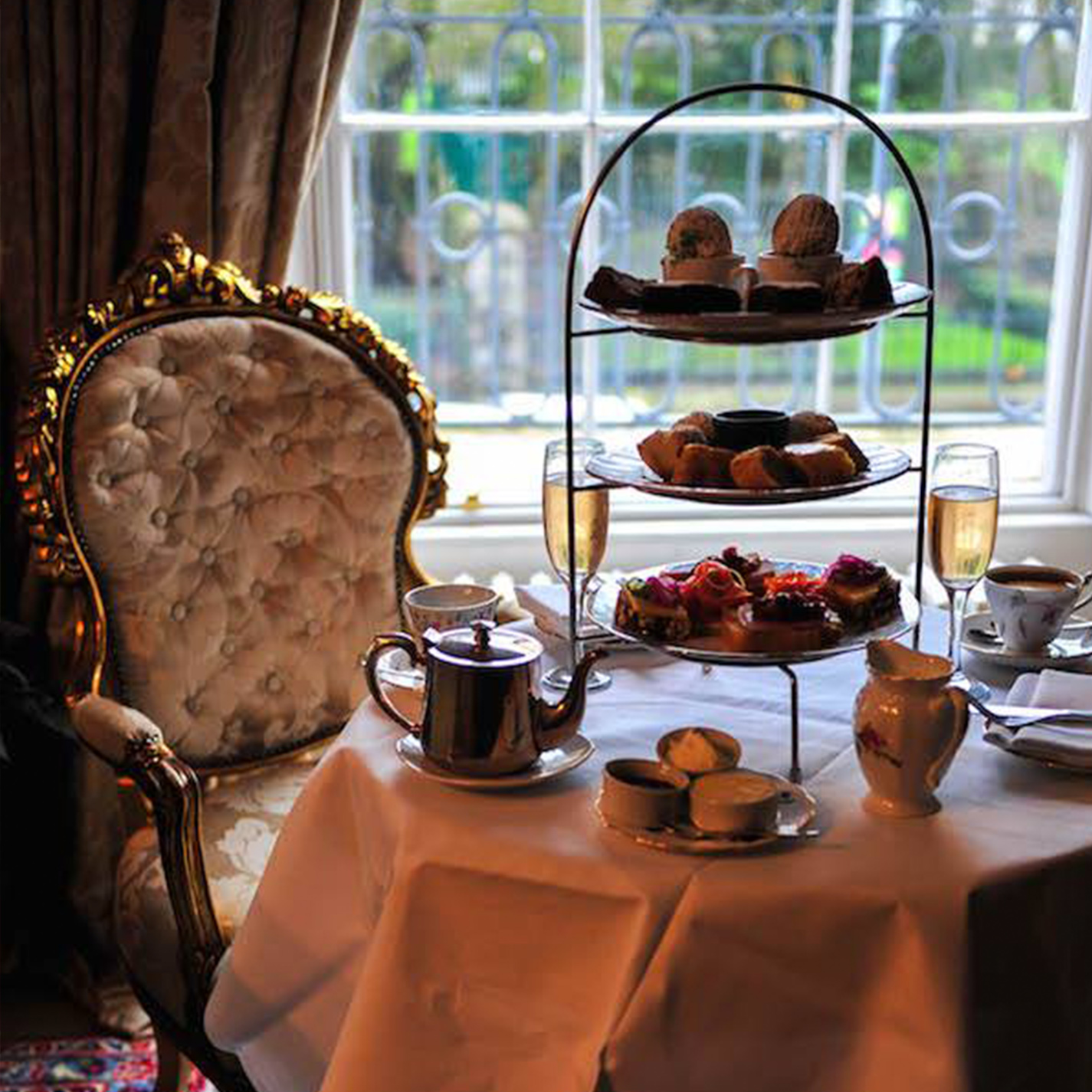 Make a break for Limerick

If you would like a taste of the Wild Atlantic Way and Limerick City with it’s diverse cultural heritage and plenty of exciting things to do, we would be delighted to hear from you. To contact Specialized Travel Services complete the Contact form or email to newyork@special-ireland.com

We can customize any of our Ireland Tours to match your tastes and budget and include the best of Ireland’s hidden gems along the way. Whatever you would like to do is up to you!! Take a moment to look at our private chauffeur vacations for some vacation inspiration.

The lyrics of the song “Limerick, you’re a lady” really says it all……………

Your Shannon water’s tears of joy have flown.

The beauty that surrounds you.

I take it with me love where e’er I go”.

Note: Featured image at the top of the blog is of Limerick City and Thomond Park stadium is in view ©Fáilte Ireland – Image courtesy of Luke Myers.