The Wild Atlantic Way, Part VIII: Off to Kinsale

It’s time to get back on the road for the last leg of our Wild Atlantic journey. We planned a leisurely trip to Kinsale today with some interesting stops along the way. The coast road is still as beautiful as ever and we were really enjoying the drive.  Our idea was to arrive in town early in the afternoon so we could have plenty of time to relax and walk around town before heading out for a nice dinner on our last night out.

As we travelled along the coastal road one more time, our first stop was to have a look out over the Old Head of Kinsale. It was a clear day and the views were beautiful. One of the great things about traveling in Ireland is that there are plenty of opportunities to pull over and just enjoy the scenery and fresh air. We parked the car just above the Old Head Golf Links to enjoy a look at the coastline. If you are a golfer, this place is for you. The stunning views and magnificent landscape attract golfers from all over the world. Make reservations in advance and you are guaranteed to have the experience of a lifetime. 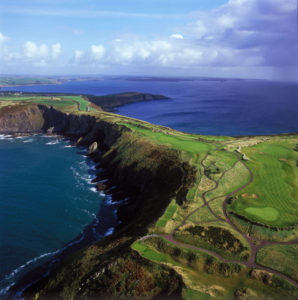 We chose this area as a stopping point for two reasons.  One being that The Old Head of Kinsale is a beautiful and peaceful place to enjoy the scenery and take in some fresh air. The other is the nearby memorial dedicated to an event that occurred just off the coast over 100 years ago. The sinking of the RMS Lusitania. This infamous incident which occurred on the 7th of May, 1915, not only changed the lives of many in this area but it sent shock waves across the Atlantic and is touted as one of the reasons the United States joined in the Great War that was raging in Europe. Sailing from New York and bound for Liverpool, the ship was struck by a German torpedo fired by the U-20. 1,198 people perished as the Lusitania sank beneath the waves in 18 minutes. Fishermen from the neighboring towns of Cobh (then Queenstown), Courtmacsherry and Kinsale all rushed to sea in a valiant attempt to save as many victims as possible. In the end, their efforts saved 767 men, women and children, including one Kitty McDonnell… my Great Grandmother. I can only imagine those people approaching the beautiful coastline of Ireland, knowing that they were nearly home, only to have their journey cut short by the perils of war. These towns have always remembered that fateful day and their heroic efforts both at sea and on shore were recognized on the 7th of May, 2015 with a centenary commemoration attended by thousands, including townspeople and descendants of passengers and crew. A fitting tribute has been erected on the Old Head of Kinsale beside the lighthouse. There is a museum there and a monument commemorating that one day in 1915. Worth a visit.

Further down the road and on our list, is another special memorial of an event that most wouldn’t associate with this part of the world. The Ringfinnan Garden of Remembrance. Just outside of Kinsale town, it is a solemn and beautiful memorial garden dedicated to Father Michael Judge and the 343 New York City Fire Fighters who gave their lives during the World Trade Center attacks in New York City on the morning of September 11th, 2001. This memorial is a beautiful, moving and quiet place of reflection befitting of the people it was put in place to remember. It consists of 343 trees, each baring the name of one of the Fire Fighters. The memorial was created by Kathleen Murphy, a former nurse at Lennox Hill Hospital who spent 40 years living in New York. Kathleen is also memorialized here as she passed away in 2011 after a courageous battle with cancer. This is a special place, dedicated by a special person and if you are ever in this area, it is well worth pulling in and walking the grounds. Kathleen did a beautiful job. Thank you Kathleen, we will never forget!

After some time in the garden, we continued on to Kinsale which is just down the road. It was still early in the afternoon and the weather was nice, so we decided to spend some time exploring.  A great place to do this is on the Scilly Walk, a scenic pedestrian walkway that winds along outskirts of Kinsale village and out to Charles Fort, a 17th century strong hold on the coast. The full walk is about 3 miles and can take about an hour and a half. The skill level is novice to moderate with most of the trail being paved. The views however, are spectacular. This walk is a fantastic way to relax and take in the sights of this beautiful town. The houses along the way are magnificent and just as interesting to gaze at as scenery while you enjoy some time outdoors.

After our walk, we checked in to our accommodations for the night, the lovely Trident Hotel. The hotel is spectacularly set on the water’s edge in Kinsale, in a prime location for guests to enjoy the stunning views. Recently refurbished, the Trident has 75 guestrooms including an executive wing comprising 30 rooms and penthouse floor of 11 luxury suites, all with breath-taking views of the harbour and enchanting town of Kinsale.  Located on the waterfront with stunning views Just a few minutes stroll from the town’s vibrant bars, restaurants and entertainment districts. We were really enjoying our last day on the road and this was the perfect place to unwind before heading into town to enjoy the evening.

For our last night out, we took a suggestion from a friend and decided to have dinner at The Spaniard, a well known local restaurant with old-world charm that has been around for generations. It sits high atop a hill looking over the town. Its name pays homage to the 3,500 Spanish who fought with an Irish alliance against the Crown during the Siege of Kinsale in 1601. A great recommendation and excellent meal.

After dinner, it was time to head out for an evening walk and possibly an after dinner drink at one of our favorite spots, The White House, which is situated in the center of town in an old Georgian guest house run by our friends, the Frawley family. We like to stop in here for a few reasons. The music is always lively, the people are friendly and more importantly at the end of a long day… it is centrally located. And being that we are hitting the road at a reasonable hour in the morning, it is nice to be close to our home for the night. So, as they say in real estate, it’s all about location, location, location. It also just happens that the atmosphere and hospitality here make it a great way to end the day. Thank you for the warm welcome, Frawleys. 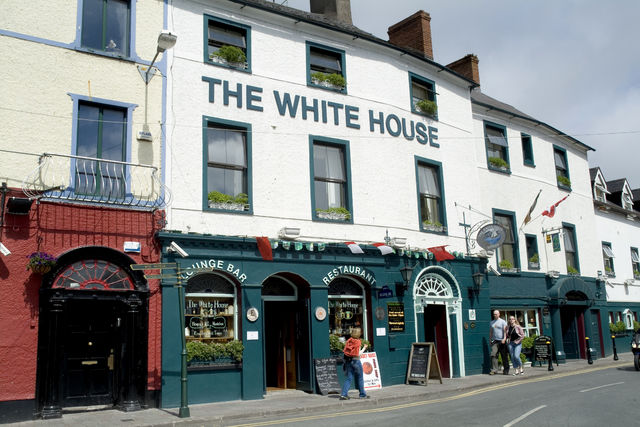