Arrive into Shannon Airport where you will be met by your private driver/guide and escorted to your luxury vehicle.

Your tour of the Emerald Isle will take you north west via the thriving market town of Ennis in Co. Clare to Galway City. En route north you may wish to stop in the village of Bunratty & visit the 15th century Bunratty Castle & Folk Park or Crraggaunowen – the Living Past, Ireland’s original award winning pre-historic park. 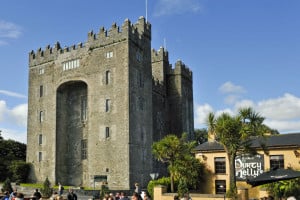 Galway nestles at the neck of Galway Bay and is reputed to have been Columbus’ final point of departure on his epoch-making voyage of discovery. The city was founded on the east bank of the river late in the 12th century by the Anglo-Norman family de Burgo. It attracted many Welsh and Norman merchants who enclosed the city within a defensive wall. Under the control of the fourteen leading families, known as the ‘tribes’ an extensive trade developed, not only with the continent, importing French and Spanish wine, but also with the West Indies. Highlights of the city include Eyre Square, Lynch’s Castle, St. Nicholas’ Church, O’Brien’s Bridge, Spanish Arch, the Famous Claddagh, beautiful Galway Bay, Salthill Promenade, University College, Salmon Weir Bridge, Court House and the Municipal Theatre. You could also visit Galway City Museum, which showcases the history & heritage of Galway.

Overnight at the Ardilaun Hotel, a family owned luxury 4* hotel in the Salthill area of Galway City.

This morning after a hearty Irish Breakfast, you can tour the beautiful Connemara Countryside. Experience its shadow of purple mountains rolling down to blue, green rocky valleys sprinkled here and there with tiny lakes and pools shining like little pieces of broken mirror, reflecting the rich and varied colours of Connemara. Connemara is a wild and beautiful region of mountains, lakes, tumbling streams undulating bog, unspoiled beaches and panoramic views. It is a Gaelic- speaking region and has attracted many artisans, who can be visited at work in their studios. Here you may like to visit Kylemore Abbey & Walled Gardens, ‘Ireland’s most romantic castle’ originally built as a gift in 1867. Alternatively you can take the Killary Cruise and enjoy the unspoilt splendor of the Killary, Ireland’s only Fjord. This 9 mile inlet has some of the finest scenery in the West of Ireland.

Return to the Ardilaun Hotel for overnight.

Day 3: Galway to Killarney via the Cliffs of Moher

Depart the City of the Tribes and travel south via the magnificentClare Coastline stopping at the Cliffs of Moher and the Burren. From Galway, travel via the village of Ballyvaughan, where the winding coast road turns seaward again passing Black Head lighthouse. You could visit Doolin Cave, or Aillwwee Cave in the Burren region. Out beyond in the blue Atlantic are the three Aran Islands of Inishmor, Inish Mean and Inisheer and the outline of the Connemara coast. Travel through the village of Doolin, a wellspring of all that is best in Irish traditional music and song. Stop at the awesome cliffs of Moher, rising a sheer 800ft from the ocean below. After a sightseeing trip at the cliffs of Moher, the road winds down to Lisdoonvarna; here you may like to stop for lunch-break and an opportunity to visit a local pub.

Continue via the Shannon Ferry from Kilimer to Tarbert to arrive in Co. Kerry; travel via Tralee down to Killarney where you will overnight at the Killarney Royal for the next 2 nights.

Day 4: Ring of Kerry or Dingle Peninsula or Beara Peninsula 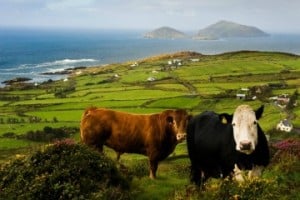 Today after breakfast, you will explore the world renowned Ring of Kerry. Ring of Kerry Tour takes you through spectacular coastal and mountainous scenery along the base of the highest mountain range in Ireland, The MacGillycuddy Reeks. The journey takes you through villages and towns depicting typical rural life in Ireland. You can visit Muckross House, a 19th century manor house, majestically situated on the shores of Muckross Lake. Or perhaps visit the Skellig Experience on Valentia Island and learn about the early Christian Irish monks and the monastery, the Light Houses and the Light House keepers of Skellig Michael.

Alternatively explore County Kerry’s other Peninsulas, the Dingle Peninsula or the Beara Peninsula.

Return to the Killarney Royal for overnight.

Bid farewell to the Kingdom of Kerry and travel north to the village of Adare, regarded as one of the prettiest village’s in Ireland.

En route you can visit Kerry County Museum in Tralee. The Museum brings to life the story of Kerry from the earliest times to the present day. Priceless treasures are on display illustrating the rich heritage of County Kerry. Travel back 600 years in the Geraldine Experience and you will see hear and smell medieval Tralee. Still traveling north you can visit the Foynes Flying Boat and Maritime Museum in Foynes Co.Limerick. During the 1930’s and early 1940’s the port of Foynes was the fulcrum point for all air traffic between the US and Europe. The Museum recalls this era with a range of exhibits and memorabilia. It was here in Foynes in 1943 that Chief Joe Sheridan invented the world famous Irish Coffee.

Your final destination today is the Dunraven Arms in Adare village. The Dunraven Arms Hotel has been welcoming guests to Adare, County Limerick for more than 200 years, offering an old-world atmosphere and old-fashioned hospitality.

Your driver will leave you in Adare this evening.

For those who wish to upgrade – you may like to spend the next 2 nights at the spectacular 5* Adare Manor Hotel & Golf Resort {supplement applies} – Situated in the lush heartlands of County Limerick, Adare Manor Hotel & Golf Resort is one of Ireland’s most spellbinding and evocative castle hotels. Steeped in exotic history and surrounded by medieval ruins, its 840 acre demesne is home to beautiful parklands, superb trout fishing on the river Maigue, and a renowned 18 hole championship golf course designed by Robert Trent Jones Senior. Unique & individual accommodation, the best of contemporary Irish food in an incomparable setting, and the highest standards of modern hospitality are hallmarks of the Manor experience.

Enjoy your day at leisure in the village of Adare. Adare is regarded as one of the prettiest village’s in Ireland. Adare, as a strategic location, has been the subject of many conquests, wars and rebellions. Snuggled in a wooded setting among the rich quiet farmlands of the Golden Vale by the River Maigue, Adare is a model village dating from the time of the Norman conquest. It has been home to the Earls of Dunraven (Quin Family) for over three centuries. Thatched cottages line its broad street, punctuated with beautiful stone buildings and picturesque ruins.The River Maigue flows under a graceful stone bridge and medieval monasteries quietly count the passing centuries. 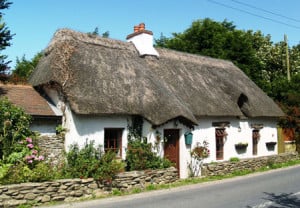 Visit the Adare Heritage Center and step back in time and experience the village’s unique rich and varied historic past, through realistic crafted model enactments, magnificent murals, as well as a “state-of-the-art” audio/visual presentation. Visit the Trinitarian Abbey situated next to the Heritage Center. This is the only recorded Trinitarian monastery in Ireland. It was originally built by the Fitzgerald Clan for the Trinitarian order of monks in the early 13th century. It is believed that the Trinitarian monks who came to Adare may have come from Scotland. The monastery was suppressed and badly damaged during the reign of King Henry VIII. Repaired and enlarged in the mid-19th century, the building is, today, called the “Holy Trinity Abbey” and is used as the local Roman Catholic Church. A visit to this historical and beautiful building is highly recommended.

Enjoy your last night in Ireland at the Dunraven Arms Hotel.

A private driver ireland will transfer you to Shannon Airport for your return flight to the US.
Slan Abhaile (Safe Home!)