Keep the travel fire burning & let your love run free exploring your Ireland. For some Irish Inspiration after being in Isolation have a wander through Ireland’s Ancient East carpeted by scenic landscapes, historic sights and idyllic towns, and framed by the Irish Sea and the River Shannon.

There is lots to see and do so where you go is up to you. Bring your curiosity, a sense of adventure and get ready to make memories that will last a lifetime. So C’mon lets make a break for it…… 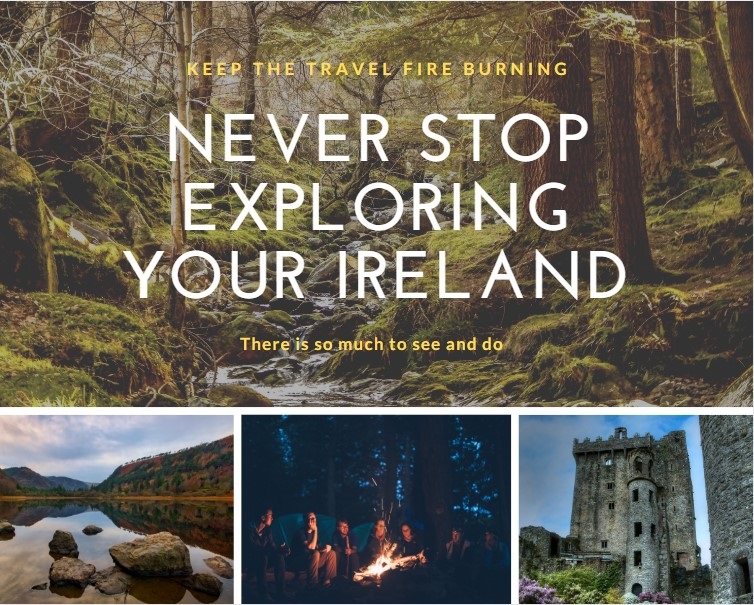 Some inspiration on what to explore in Ireland’s Ancient East…..

Experience fun and challenging activities in a safe and friendly environment. The adventures at Carlingford Adventure are based around land, sea and sky and range from High ropes, ziplines, rock climbing and lazer quest to watersports (Stand Up Paddle Boarding, Pier Jumping, Kayaking, Windsurfing, Canadian Canoeing, Raft Building, and Kayaking.)

Set in Ireland’s ancient east in the beautiful, historical and magical Boyne Valley, Newgrange Farm is one of Ireland’s first open farms and surrounds the famous national monument of Newgrange, in County Meath. A visit to Newgrange Farm and Archaeological Park will give a truly marvelous insight into farm life today and in older times. There is also a tractor trailer ride available, which takes its passengers down through the farm crops and livestock, to the River Boyne and national monuments and past the tooth fairies’ palace!

Sallins in County Kildare is where trade on the Grand Canal first began when passenger and cargo barges started hauling their horse drawn loads between the small Kildare village and Dublin in 1780. Today it is a bustling inland harbour village with four award winning restaurants and bars on the waterfront, and there’s a flotilla of boats, barges and houseboats in the harbour. Cruising for just an hour or two with Barge Trip on the Grand Canal, you’ll travel through 250 years of history: through locks, bridges and aqueduct, through tales of great engineers and merchants plying their trade. The landed gentry, poor folk escaping the Great Famine, heavy horses pulling their cargoes – all have left their legacies here. Beginning in Sallins, the skippered traditional canal barge trips through beautiful Kildare countryside will stir so many stories to life in Ireland’s Ancient East.

When Joe and Maeve O’Connell bought a house and farmland next to Jerpoint Abbey, they had no idea what treasures were buried in the fields where they had planned to graze cattle. Jerpoint Park is a working farm but is privileged to host a monument of notable importance – The Lost Town of Newtown Jerpoint, making Jerpoint Park one of the most important heritage sites in Ireland, and a must-visit in Thomastown.

You might have thought that Christianity’s best loved saint – St Nicholas – was buried in Turkey in the 4th century? But read on…… It’s said that – during the Crusades – his remains were ‘rescued’ and brought first to Italy, and then to France. Finally, the Normans brought them to Jerpoint Park in Ireland’s Ancient East – where farmer Joe O’Connell will show you St Nicholas’s Tomb in a field. A guided tour with Joe will delve deep into the history and importance of one of Ireland’s best surviving examples of a 12th Century medieval town, where you can explore the standing remains of St. Nicholas’s Church, the domestic tower and the stunning 14th Century Medieval Tomb, before enjoying a sheep dog demonstration, fishing, or a scenic nature walk and a picnic in the unspoiled countryside along the River Nore.

Highbank Organic Orchards in County Kilkenny was built by the Calder-Potts family in the 17th Century. The first apple orchards were planted by them in 1969 to compliment hop gardens. The Calder-Potts know their apples and the varieties grown on the land are specifically chosen for their juicing properties which are uniquely complex and full of health-giving vitamins and minerals. From Pip to Sip they offer apple juice, cider, mulled apple juice and their very own orchard syrup, at the organic farm shop at the Highbank Organic Orchards, which is well worth a visit.

If you fancy a day out on the water off Kilmore Quay, the Celtic Lady II, skippered by John Devereux, with Kilmore Quay Angling, is a 105ft, 400HP, fast off-shore vessel fully licensed by the Department of the Marine and fitted with a full range of safety equipment. Celtic Lady II sails from Kilmore Quay, Co Wexford. Rod and reel hire are offered and seating is available for all passengers. Kilmore Quay is one of the country’s top sea angling centers and produces a multitude of species.

On Your Bike! Waterford Greenway Bike Hire are the premium bike hire company serving the whole of the beautiful Waterford Greenway. Operating from three key locations in Waterford, Kilmacthomas and Dungarvan they have a wide selection of bikes available for all your needs. They offer a free, reliable shuttle bus service to all of their bike hire guests, enabling you to cycle as little or long as you like! The Greenway is a spectacular 46km off-road cycling and walking trail along an old railway line, venturing from the quays of Waterford, a city founded by the Vikings, all the way through an area rich in Irish heritage to the historic port of Dungarvan, a vibrant seaside market town with a pretty quay-side setting. Discover the stories of the past as you stop at attractions along the way and uncover the secrets that they hold — from the stunning gardens of Mount Congreve, known as one of the great gardens of the world — to Viking settlements, medieval ruins, a Norman castle, deserted railway stations, an Ice Age rock with fascinating mythical powers and a heritage railway train that still runs along part of the track.

Blackwater Kayaks & Canoes is located in Villierstown near Cappoquin, County Waterford and offers a range of activities on the expansive Blackwater River. Ireland’s third largest river, rises in the mountains east of Killarney and flows east to Lismore before entering the sea at Youghal. It is a major salmon river and the angling season opens on 1 February and ends on 30 September. Flanked by the Knockmealdown Mountains and inhabited by untamed wildlife the river is “Blackwater River Waterford” absolutely breathtaking all year round. A river steeped in history, her banks are dotted with lovingly maintained stately homes and stunning architecture.

Discover Ireland have a wonderful video to Upstate’s “Let Your Love Run Free” as you take in the gorgeous views around Ireland’s Ancient East.

Specialized Travel Services look forward to welcoming you to the Emerald Isle in the near future. We’ve lots of Irish inspiration to offer when you’re out of isolation and ready to make a break for it …….. Have a look at some of our private chauffeur drive tours for further inspiration and to keep the travel fire burning!

Note: Featured image at the top of the blog is of Hook Lighthouse, County Wexford © Photographer/Creator: Luke Myers © Failte Ireland.