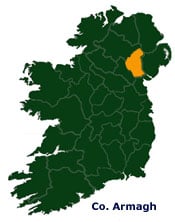 Armagh, City of Saint Patrick and Ireland’s Christian capital has a long tradition as a major European heritage Center. Armagh has a unique heritage and it prides itself as being St. Patrick’s chosen place. The legacy of St. Patrick lives on with the City’s two majestic Cathedrals – St. Patrick’s Church of Ireland Cathedral in the heart of the city and St. Patrick’s Roman Catholic Cathedral. Armagh is a vibrant City steeped in history, but not buried in the past. It cherishes its position as a natural gateway to Northern Ireland and is ideally situated for exploring Derry, Donegal, Fermangh, Belfast and the Antrim Coast.